So it seems that while I had thought that I had posts scheduled all this week while we were out of town visiting our relatives I didn't...

So since I didn't share them those lovely posts will be saved for next week... hehehe

While I was away visiting our family I spent one day with my sister-in-law and on the way back to my in-laws for the night we spotted some wildlife and proceeded to go "hunting".

This guy was trotting all over the community and I finally got him.... it only took 4 shots! 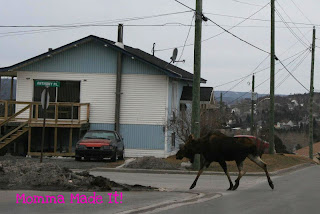 Happy Friday!
Posted by Emilee at 5:20 PM No comments:

Email ThisBlogThis!Share to TwitterShare to FacebookShare to Pinterest
Labels: Photo Friday, Photo's by me

As you may know from last weeks Photo Friday we celebrated my Momma's 50th Birthday this past weekend, and what do you give to your Mom when she turns 50?

A party of course!!

As a matter of fact the only thing she wanted was a party... So that was what we got for her!

So I thought that I would share with you what I actually made (food wise anyway...) with you today.

So here it is! 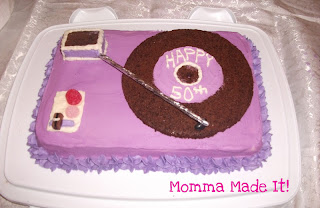 The Record Player Cake!
This cake was so hard to make and yet sounds so easy when you put it into words... I was rushing at the end to get it done so I don't have any in progress pictures besides this one when my little baking helper was helping  me to prepare the brownie that would eventually become the record... 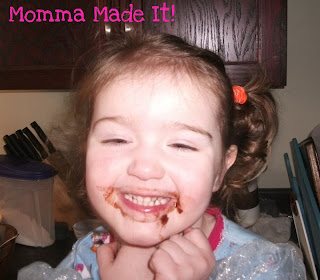 (Yes that sure is a late 80's early 90's side pony tail she is sporting there... a la the Robert Munch book "Stephanie's Ponytail"!)
I started to make this by making a batch of my favorite brownies I baked them in a cookie sheet, this kept the brownie as flat as possible. Once they cooled I took a pot lid that was the right size and placed it on the brownie and cut around it with a sharp knife to make the record. Once it was ready and I had the icing made (I made my favorite icing recipe) I iced the details on.

I then iced the cake with a crumb coat (to be sure that no crumbs were on the outside of the cake.) Then iced it with the purple, added the brownie record and did the rest of the icing and adding!

All in all it was great fun to make (despite having to make a second cake because the first wouldn't come out of the pan), it was super tasty and everyone loved it!

Have you helped someone celebrate a milestone birthday recently? I'd love to hear about your parties in the comments!
Posted by Emilee at 8:49 AM No comments:

It's true my first Giveaway is over! Click HERE to see who won the hand painted personalized sign!