I've lost track of time, I keep getting behind with my blogging but when your a mommy and a wife and a sister and a daughter and a friend all at once life kinda takes over sometimes...
So since I missed a few days, here is what I should have posted...
This weeks confession is.....
I get jealous, I get very jealous.... I love my life, I take all responsibility for my decisions and I know that only I can make a change in my life. But sometimes I think that it might be nice to have "the life" you know the one... where you can just do what you want not worry about a budget or keeping the family on track, just go and do what you want when you want... I just think that it might be nice to feel like you can have it all whenever you want. But then again I look around me and see that I do have it all I have an amazing man who loves me for who and what I am, a beautiful little girl who is unbelievably smart and another wonderful addition to the family coming soon, who has started to give me little nudges of reassurance already, and a family full of people who believe in me! I am blessed!
This weeks Photo is one of my favorites!
My girlfriend's gentleman friend took this one and since his birthday was this week and we attended a gathering to celebrate his birth at his place last night I thought it only fitting to feature his photo. This is actually one of the first photo's of his that I saw and it now has a place on my wall, it's taken in downtown St. John's and I just can't stop looking at it, between the angle and the lighting I am captivated by it! 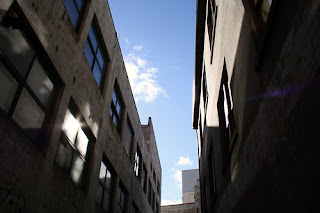 If you like this one check out his blog My Perfect crime. He has quite the collection of photos, cartoons, music and inspirations of all sorts over there...
Well that is it for now but I am hopping that I will have a bit more time for the blog as things are going to be changing quite a bit around our house, Robyn just got a new job that will be taking him away from us a bit more. He will have to travel about an hour and a half to get to work each day and the same to get home so I will have a bit more time for crafting and blogging so I should be a bit more on schedule in the near future...
Posted by Emilee at 11:43 AM No comments:

I know I've mentioned before that I am working on my Christmas to-do list... many people think I'm crazy even thinking of Christmas, as it is March but to tell the truth I have been planning for Christmas since January. I don't think I'm crazy I think I'm realistic. I know that I want to make the majority of my gifts this year and I know the Baby is due in August, so that means that I will have a 3 month old infant come Christmas... So I say lets do what we can today and limit the time I will need to spend making gifts leading up to Christmas so that I can avoid the "crafters stress" I usually feel in the weeks before Christmas. With that in mind I already have a list of recipes, craft ideas and plans ready to get working on, not to mention the excel worksheet I have ready with the list of people I need to craft for and what I am making for those people! I know I sound so organized, but if you saw my craft stuff you'd disagree.
I posted last week here that on the top of my to-do list was the Mermaid Dolly tutorial found here at If life was like a cupcake. I went ahead and made two of my own! 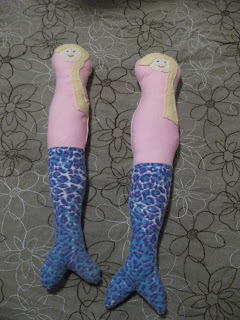 I made mine with fabric I had left over from other projects as well as a pair of  blue leopard pajama pants that Ive had forever, to me they looked a little like a mermaids fish scales, I also sewed the face on with tread making the eyes with blue and the smile with red mainly because I don't typically have fabric paint on hand and because when I craft I am over eager and want o see it finished ASAP, and the fastest way was to sew it on. 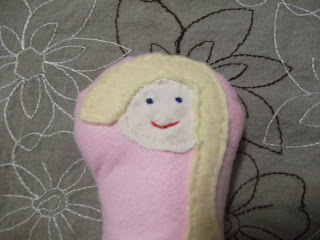 I am super impressed with them, they are a bit longer and quite a bit skinnier than the ones that Amanda made but I am so happy with them. So happy in fact that I had to take the pictures and then hide them away as they are a gifts for Christmas. Delaney will get one for sure but the other one may not find a home here with us, if the baby is a boy I will likely give it to Delaney's little friend. 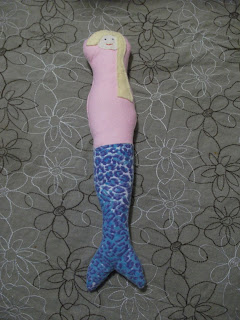 It's been a while since I used my sewing machine, mainly because we got in a fight.... well I yelled and cursed on it repeatedly before last Christmas, so when I took it out to work on the Mermaids I was hopping and praying that it wasn't still made at me. You will be happy to hear that we have made up! And now it's getting more and more use as the days pass! I am taking a major cutting on my gift list this week I have so many plans for gifts. I picked up some very nice Christmas fabric the last time I went to the thrift store, there were two pieces there one a blue with Christmas penguins and one white with Christmas toys and nutcrackers and such. I got each piece for .49 cents! Yup 49 CENTS! I knew I wanted to make something for the baby  for Christmas and over the weekend I got the best idea! I made a template, cut it out and sewed it up! I am so impressed with them! 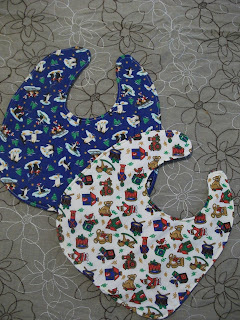 They are both reversible and have both fabrics on them. I made two because Delaney's little friend is going to be a big sister before Christmas too and I wanted to make something for her baby too..
Have you started work on your Christmas list yet? Or do you have any ideas as to what you will be making? If you do leave a comment you never know who might get a little inspiration from your project!
Posted by Emilee at 12:35 PM 3 comments: 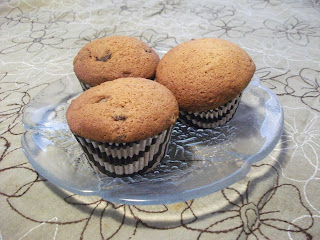 Banana's are a rare commodity in our house... as are these muffins, not because we don't buy them but because they just don't last. Between Delaney and me bananas don't make it a week in this house. In order to make these muffins I have to buy the bananas the store sells on clearance because they are already bruised and black,and when I do make them they are gone within a few days! Thses are the most moist and tasty muffins ever made. The recipe was found online about 4 years ago when I couldn't find the one my mom used to make and now it is the only recipe that I make, I use it for banana bread too. I have received so many comments and compliments on this recipe it's almost unbelievable how much people like it!
So here you are my muffin recipe!

1/4 cup butter or margarine
1 cup sugar
1 egg
3 mashed bananas
1 1/2 cups flour
1 tsp baking soda
1/4 tsp salt
1 cup chocolate chips (optional)
Cream together the butter, sugar and egg, beat well. Add flour sifted with salt and soda alternately with mashed bananas. Beat until smooth.
Bake at 350 degrees, 1 hr for bread or 2-30 mins for muffins.
This is the original recipe but I usually don't sift the flour soda and salt, I mix it in a separate bowl and just add it in. I do also add a splash of milk if I don't have 3 bananas, and I have been known to add a dash of nutmeg sometimes too... 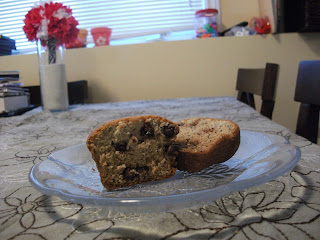 Give it a try! You might just like them as much as we do!
Do you have a recipe I should try? If you are stopping by to have a look let me know what you love to make!
Posted by Emilee at 2:09 PM No comments:

It's true my first Giveaway is over! Click HERE to see who won the hand painted personalized sign!